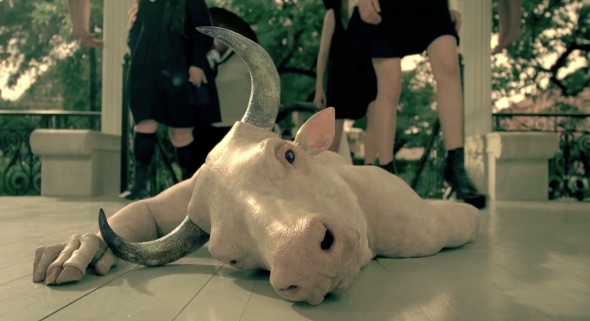 In an essay for the Los Angeles Review of Books Anne Helen Petersen mused on the presence of abjection in American Horror Story, noting how the secondary understanding of the term—that of transgression and destabilization—appears in the series through references to duality and unheimlich. In some ways, horror is the genre that is best summed up by the phrase “…but not”: most obviously in that things are rarely as simple as they initially appear to be but, more subtly, also that they are both more and less than they seem to be. Gothic horror writers delved deep into this concept, exploring how young female ghosts were present (…but not) or how vampires were alive (…but not) and to this day horror remains the domain for things that are there…but not (or at least not in the way that we often fear that they are). What complicates things, however, is that horror often demands that we take a turn from either/or thinking (i.e., that spirits are either there or they aren’t) toward a realization that horror is often about both/and thinking (i.e., that presence is both there and not there and these two ideas aren’t contradictions). Horror, in short, is a genre capable of nuance and subtlety at the same time that it is about outright terror.

In her essay, Petersen noted how American Horror Story (in addition to, I would argue, Ryan Murphy’ other series) can contain both elements of feminism and misogyny. This revelation should not come as a shock for any viewers of Murphy’s past work as many of his series (including American Horror Story) often espouse a sensibility in which characters seemingly have a pass because they are also somehow disadvantaged. And ultimately, I think that this emphasis on persecution is what constitutes a consistent failing in Murphy’s series:  from bullying, to LGBT issues, to women and race, it seems like many of the story arcs in Murphy’s shows are preoccupied with exploring what it means to be marginalized from a very specific vantage point that itself remains unexamined. Credit should of course be given for a show like Glee that tries to think about the problem of bullying in youth or addresses the horrible ways that LGBT youth can be driven to suicide. And yet, despite this good intent, the treatment of the issues on the shows continues to be one that is reactionary (in that I do not think that the show is actively thinking about the tribulations of being a youth and only addressed the bullying/LGBT issues because they happened to trigger Murphy) and not particularly thoughtful in the way that they present solutions to problems.

But getting back to the notion of feminism and misogyny being intertwined (and muddled), we have the opening of tonight’s episode, “The Replacements,” where Fiona’s predecessor as Supreme (Anna Lee) references “bra burning” as a inaccurate, if ultimately widespread, shorthand for feminism and then calls Fiona a “vicious gash.” (Is it worth noting that Fiona did not attend the bra burning party?) Are we to believe that the derogatory attack is supposed to be more palatable or enjoyable because it is coming from a woman? It seems like any man who dared call a woman a gash (and let’s not even get started on the way in which that, like Naomi Wolf’s Vagina, reduces a woman down to a body part) would immediately be labeled as misogynistic, so shouldn’t we expect the same animosity toward a woman? The problem with American Horror Story is that even if we were to take a second to think about what this use of language actually implied for Anna Lee, Fiona, and a cast of witches who Murphy is determined to cast as oppressed, the show does a poor job of linking together other feminist moments/issues into a cohesive position about women, power, and patriarchy.

Going back to last week’s episode, I surmised to a friend that Madison’s refusal to admit to the rape had very little to do with her fear of the police and much more to do with the way in which she was unable or unwilling to cop to the violation of her body. From the beginning, I had a feeling that Madison embodied this postfeminist mindset wherein power flows from the body (not as literally as Queenie but through the standard concept of looks/beauty) as is hinted at in her behavior during the frat party in the first episode. It is without much surprise, then, that we see Madison in a skin-tight dress espousing the view that her body will win the affections of her new neighbor (Luke). Given that the other enticement for Luke is Nan’s homemade cake, there is fertile ground to launch into a discussion about women’s power in the magical and “real world” senses that goes untouched. In and of itself this is not a major issue but if Murphy’s express goal is to craft a season around persecuted minorities, and we are choosing the motif of witches as our central horror figure, and we are drawing a unsubtle connection between youth/beauty and power (again, both magical and postfeminist), it seems like feminism as a redress to the power imbalance must be a thing that is always on the table. And yet it is not.

Bungling another attempt to comment intelligently on states of oppression and power imbalance, we see the character of Madame LaLaurie continually espouse racist remarks (but it’s okay because she’s from the 19th century and didn’t know any better!) in a way that tries to employ the Mad Men gambit without any of the latter show’s skill or sensitivity. If I were being gracious, I would say that there is some sort of meta commentary here about how Fiona cannot abide racists and yet uses the term “slave” unproblematically given its implications and associations for the world that she inhabits. (I would also note that Madison uses the term at the frat party and it seems as though we are witnessing a trend of white witches who can only recognize their own form of oppression and not how they belittle others. That these women are so distanced from the historical weight of the term “slave” as applied to a person in a position in servitude is not itself the problem, but the failure to develop, comment on, or challenge that is. For example, what then what do we make of the way in which Queenie uses the term to refer to Madame LaLaurie? Is this a form of reclamation or is she simply adopting the framework of Fiona, relishing in her power of another? Contrast this against her confession to the Minotaur that she has been called a beast herself and you begin to see how the seeds for a very productive discussion about the nature of power and its effects on people are in the show but remain untapped!) I suppose, at the end of the day, my breaking point is that I just don’t trust the show to come out on the other end with anything insightful about oppression. Hell, even the way in which Fiona’s desperation to maintain power speaks to the way that women in power draw mentees in and then work to keep them down (Diane on The Good Wife anyone) is also a line that fits well within the provenance of modern day feminism and notions of oppression. In a sad and unfortunate way, I think that the show will be beholden to its white liberal upper-middle class mentality and understand persecution in a very narrow way that is ultimately unhelpful.

My biggest issue with “The Replacements,” however, was that “large moments” of tonight’s episode just didn’t make me feel anything. Now granted, I came from a background of both Biology and horror so my tolerance level may be higher than most, but I think that American Horror Story is at its weakest when it mistakes shock for genuine development. Shock, jump scares, and the grotesque of course has its place in the genre of horror and, when used appropriately, does a great deal to dislocate the viewer from his or her surroundings and reexamine the everyday from a new perspective. For me, tonight’s episode just seemed to be trying to throw too much at the viewer for no reason other than to shock and that is just not good story telling (or horror, for that matter). Are we, for example, supposed to be shocked that Kyle is returning to an abusive home? Hardly, since that whole reveal was telegraphed from the beginning of the episode. And while it would be interesting to have that have some bearing on Kyle’s current mentality, he seems to be operating much more as an animal and thus it seems unlikely that this particular bit of history will have large implications for the character moving forward. In contrast, the long slow pan into Kyle’s mother, Alicia, with her head in a noose is much more in line with the dread that horror embodies than the sight of her putting her hand down Kyle’s pants. Now, if the sexual abuse caused us to rethink Kyle and/or his mother in a drastically different way, we might also experience the slow horror of the realization but this is lost to us thanks to the show’s desire to shock. (We might also mention the way Misty mentions that Zoe won’t come back for her after Kyle leaves and then begins dancing as a quieter, but much more effective, moment.)

And, speaking of Alicia, it is here that we again see American Horror Story’s refusal to consider oppression that exists outside of the scope of the witches. (I mean, I know the #firstworldproblems and #whitepeopleproblems memes are old, but, seriously.) There is a wonderful potential here, I think, to consider the ways in which lower class people are subject to discrimination (and Alicia is certainly made to be emblematic of white trash). And let’s not even get started on the way in which black culture and voodoo is continually othered by this show, making it seem full of “primitive” ritual (because sophisticated white witches surely don’t butcher goats).

Alternatively, were we supposed to feel something when Fiona killed Madison (who I sincerely doubt is The Supreme given the anvil that witches can have four to five powers)? With Misty in play, death looses its meaning and it never seemed to be of any doubt that Fiona would do something like that in order to main control over her life and powers. Add to this that Madison was never drawn to be a particularly sympathetic character (unless we were somehow supposed to buy that Fiona and Madison had turned a corner in their “night out” montage) so really, who cares about all of this anyway?