What else is speculative fiction other than a bagful of nickels? 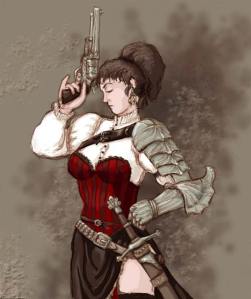 This image, from Dexter Palmer’s book, has long haunted me since I first encountered it. Hope, possibility, dreams unrealized—the nickels manifest an interesting relationship between Harold and technology that extended far beyond the original creator’s intention. And, in a way, isn’t this what steampunk and science fiction are all about? It is what is represented by the nickels rather than the nickels themselves that are important and we might even turn to Saussure’s semiotic labels of objects, signified, sign as we realize that there also exists a tension because the only way to manifest the dreams is to spend the nickel—what is the balance between dreams realized and the pull of dreams left to dream?

Ultimately, however, we must also ask ourselves just how “punk” is steampunk? If the term endeavors to draw upon the Western history of punks from the 1970s, it must then speak to a form of subversion or resistance against the dominant culture of the time. Although one might argue that the aesthetic of steampunk along with an emphasis on construction or reappropriation of machines certainly represents a challenge to the status quo, the centrality of technology in the lives of steampunks certainly seems to remain aligned with current views. Technology looks different, but does it function in a fundamentally different way?

Although a casual fan of the culture, I also continue to wonder about just how deep this love of Victorian-era ideals go. Perhaps I am just sensitized to the resurgence of Gothic (e.g., horror, gothic Lolita, etc.) and Victorian because of my research interests? I find myself struggling with the grand visions put forth in steampunk (not unlike other forms of technological utopia we have encountered previously in the course) as erasing the very real struggles that surrounded the appearance of steam-powered  technology in the 19th century. In addition to the pollution and physical hazards mentioned in Rebecca Onion’s piece, I also think about how the new machine culture affected workers’ health. But even beyond the scope of the machine and the factory, steampunk seems to pluck out fetishized elements of clockwork while leaving the very real (at the time) menaces of disease, improper sanitation, and corpse stealing that were intertwined with developing technology in the Victorian age.

But then again, perhaps I am reading this all wrong. Does steampunk speak to a deep cultural need for us to strip away the layers of shine and sheen that surround modern implementations of technology? To see the gears and pistons is to see behind the curtain and experience a different type of technological wonder all together. Is there a sort of excitement that comes from knowing that gadgets might not work? And, as mentioned earlier, surely the culture of production that pervades the experience of being steampunk speaks to an increasingly diminished notion of the average person as tinkerer.

Twinkle, Twinkle, All the Night

There are times, I think, when all of this just seems overwhelming. With a new section each week, we are asking each of you to grapple with things that you may not have encountered before and I completely understand that this may not be easy.

But, then again, who said it was going to be?

Although you have to find the balance with this, some part of me believes that, as investigators, we should be a little overwhelmed for it is in this moment that we begin to grasp just how large the problem really is. What was once so clear becomes infinitely murky and we struggle to find a foothold. The issues that Asians Americans face are complex and seemingly never-ending. How do I go about dismantling the myriad problems that we encounter every day? Will I even make a difference? Should I even try?

It’s taken me a few years to get to where I am now but I have to come to believe that the answer is a resounding “Yes.” I get called out for being impractical because I’m not as interested in deliverables, action items, and long-range plans; instead, I’m interested in the transformation that occurs on an individual level when one decides that he or she is capable of making a difference.

And the thing that they never tell you in school is that you don’t have to change the world in a grand way on your first go. Making a difference isn’t about spectacle and scale so much as it is about intent and meaning. There a million ways in which one can change the world on an everyday basis that have profound and lasting implications and it is these sorts of actions that I often think about when we come to issues of sexuality and gender in CIRCLE.

By now, all of you have gone through the exercise where we attempted to place ourselves in the mindset of someone who does not identify as straight. Although our session exhibited moments of laughter and sympathy, I hope that the exercise also went beyond this to generate a feeling of empathy. I get that it’s a bit heavy to think about some of these things on a night when you are coming off of class and looking forward to homework, but I would challenge my session to think about how they would react if they couldn’t just go home after all was said and done. How might you feel if you really had to tear off the corners of your star?

The thing that we strive to teach our students in CIRCLE is that all of these issues are linked (and, yes, messy) but that you can also apply what you’ve learned from one week to another. What if you thought about sexuality like you think about ethnicity? Students in our session can’t just stop being Asian American—just like other students can’t stop being GLBTIQ. How can you map your need to justify your worth as an Asian onto things like gender or sexuality?

But even if that’s a bit too heavy for you, I do want to mention something that I brought up at the conclusion of our session. Issues of gender and sexuality figure heavily into what I do, along with my experiences in college admission and psychology. I spend a lot of time thinking about self-harm/mutilation, eating disorders, depression, restlessness and projects like It Gets Better (which I can happily discuss the faults of). I spend a good deal of my time trying to think about ways to change educational policy to help students to recognize and feel of worth; I think about bullying in schools but also bullying on Perez Hilton, TMZ, and even by Dan Savage.

One of the things that I have learned in my years of college admission is that an increasing number of students are suffering from something that I call “floating duck syndrome”—on the surface, students are serene and perfect but, underneath the water, their legs are churning. Needless to say, students have some issues. I don’t mean to imply that students will not be able to overcome these things, but I must admit that I was shocked to learn about what they were dealing with.

However, I should also mention that I am incredibly hopeful for the generation of students that is following in my footsteps. I am hopeful that students will learn to brave the dark places of themselves, secure in the knowledge that friends and family will always be there to draw them back. I am hopeful that students will come to understand who they are and accept themselves for that. And, I am hopeful that students will learn to step outside of themselves in order to offer their help to those in need. I am lucky to be in a situation where I can empower future students to realize that, although occasionally overwhelmed by adversity, they are all survivors in some respect:  any person who has ever been teased, ridiculed, outcast, or made to simply feel less than is a survivor and can embrace that. And, because you are a survivor, you have been imbued with the power to tell your story to others in similar situations in order to pull them through. Ultimately, I am also hopeful because I have learned that young people are incredibly resilient and innovative—you can accomplish some amazing things if given half a chance.

And one of those amazing things is to realize just how much power you have. As I mentioned before, you don’t have to change the world overnight but I challenge you to realize that, just by being yourself, you possessed an incredible amount of agency:  each and every one of you has the power to keep at least one point of that star intact. If they so choose, the you have the power to potentially save a life—and how amazing is that?

This week you were all given stars, but the thing that you need to realize—as cliché as it might sound—is that you are all, in your own way, stars. Go out there and burn bright. Shine like you’ve never had any doubt.