Mind over Matter? Mind as Matter!

If Cyberpunk was concerned with mapping, defining, and controlling the Metaverse—the space out there—then this week’s readings largely seemed to concern themselves with disciplining the space in here, invoking aspects of Cartesian dualism along the way.

Helping us to transition from Cyberpunk to Cyborg Feminisim is Pat Cadigan’s Mindplayers. Thematically, the book seemed to express striking elements of the cyberpunk ethic (as much as the movement can be said to express a unified voice) with the subjugation of the body to the mind. Perhaps expected from the book’s title, I was still struck at how personhood was defined in terms of the mind and not the body.

In any case, Gladney (who was apparently still going by that name for the sake of convenience) had passed all the critical points in redevelopment and become a person, again or for the first time, depending on your point of view. He was certainly not the same person—the man who had emerged from the blank brain was (probably?) reminiscent of his former self but no more self than he was anyone else. (200)

This is, of course, not to imply that the point of view expressed in Mindplayers is at all invalid, for one readily sees the important role that the mind plays in cases like Terri Shaivo’s with respect to identity and personhood. However, at the same time and for all of the interesting thought experiments that occur in the overlap between mental and virtual worlds, I think that Cyberpunk does us a disservice by leaving out discussion of the body.

And what are the causes and implications of such a move?

I don’t think that we, as a culture, have forgotten about our bodies but I do think that Cyberpunk has helped to naturalize the sense that we have domesticated, controlled, and tamed our bodies such that the “body” is simply not worth talking about anymore. Cyberpunk is, of course, not solely responsible for this act as we have come to do much to discipline our bodies over the years (easiest to see in the realm of health/sanitation and cleansing the body, removing/cutting hair, etc.) but it did seem to further drive a wedge between the potential of the mind and that of the body.

Getting away from the Cartesian dualism, I do not think that we can only talk about the body at the expense of the mind, but I am incredibly interested in understanding how these two perspectives are linked. Although we know that both systems can operate independently of one another (with reflexes on one hand and brain activity after death on the other), I am most curious about the ways in which the mind knows the world only through the body and how the body can have its own form of memory. 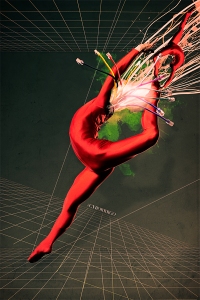 Speaking somewhat to this point of view, Cyborg Feminism also joins the discussion at roughly the same time as Cyberpunk (if perhaps a tiny bit later). Although not expressly concerned with these issues of the body per se, I see Cyborg Feminism as a movement that seeks to reincorporate discussion of the body by challenging the notion of the body’s construction as natural or sacrosanct. In Cyborg Feminism we see the beginning of themes that will continue on in Transhumanism as we cobble together new bodies out of bits of technology, as the movement argues for the extension of the human body. (As a side note, I am just starting to look at the movement from Posthumanism to Transhumanism and how this trajectory mirrors the transition from Cyberpunk to Cyborg Feminism with respect to the obliteration/eradication/subjugation of the body and its reformation.) Ultimately, however, I am interested in what all of this might mean for the ways in which we define our bodies—beyond discussion of bioethics (although this is surely a part of the conversation), I am curious to see whether we will work to reconcile new manifestations of the body with our evolving identities or instead seek to repress them.