Sex, Drugs, and a Little Bit of Rock ‘n’ Roll

“JT is the man,” asserted Scott, my former coworker and good friend.

A remix of “Summer Love” played out of my car’s speakers as we drove toward the airport. It had been a long day and I didn’t feel like getting into my usual playful argument with Scott about this subject. Although close, we are completely opposite in many ways and music was definitely an area in which we had our occasional disagreements. I could not help but get caught up in his enthusiasm at times, but I felt a much greater appreciation for the music of the 1960s.

Something fantastical happened in the 1960s:  political, social, and cultural change swept the globe in a way that has not been seen since. While the decade seemed marked by vast periods of turmoil and upheaval, the Sixties also changed the way that we viewed the world around us. Of particular relevance was the shifting nature of the music industry—it was during this time that record labels first recognized teenagers as consumers. So, while Scott might argue that *NSync was of great musical importance, I would always contest that the original boy bands had a much more profound impact.

Over the past decades, companies have begun to market directly toward children (there are even consultants out there to help your business target kids watching Sesame Street!) and while the appropriateness of this topic is larger than the scope of this entry, the interesting thing to note is how the pharmaceutical industry has not only adopted the tactic of marketing directly to consumers but also marketing to consumers who are not yet adults.

Once upon a time, representatives from the drug companies would attempt to woo doctors to tell them why a particular product was a good option for patients. Now, you find media littered with ads for various pills and shots telling the public to consult with their doctor for treatment. While I certainly am not against individuals obtaining information, the cynical side of me can’t help but kick in. 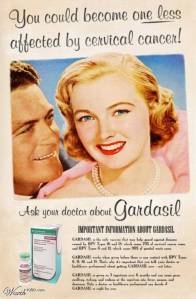 Take, for example, the series of television advertisements for Gardasil. The government just released a study showing that approximately 25% of teenage girls in the United States have received the Gardasil vaccine. But what does it mean that only one company is making the vaccine and that the same company is running ads to tell teenage girls to be “one less” person who gets cervical cancer? Don’t get me wrong, I think that it’s great that we have a weapon against the disease, but why does the main proponent seem to be the entity that has the most to gain? Should the ads also mention that Human Papillomavirus (HPV), the thing that Gardisil is supposed to counteract, is the most prevalent Sexually Transmitted Infection (STI)? Should the ads mention that the same precautions that work for other STI’s also works against HPV?

For me, the biggest problem seems to be that the advertisements operate on individuals’ inherent fear of cancer. Instead of helping people to more fully understand the role of the vaccine in the context of sexual health education, the commercials cause people to think, “If I get this shot, I won’t get cervical cancer.” While it might be true that the vaccine is effective, should a company that is making such a product feel the responsibility to educate their constituents on the bigger picture? And, finally, are we as a society saying that those who cannot afford the vaccinations somehow deserve to be at risk for cancer?

The car engine hummed underneath me as I pulled away from the terminal, questions swimming through my mind. Various thoughts ran through my brain as I searched for answers, but, in the fading afternoon light, I found myself reminiscing about the simplicity of a summer love.

This entry was posted on October 20, 2008 by trojantopher. It was filed under Pop Culture, Sex Education, Youth and was tagged with 1960s, Gardasil, HPV, Justin Timberlake, Sesame Street, Teenagers.